We, member of this organization, were thinking about social service that directly help to the poor people of remote areas because we know the actual problems of such people and we have been involving in social service in any way but we desire to work in group and organized way. Intense tremors, and subsequent aftershocks, landslides, and avalanches caused widespread damage to personal shelters, infrastructure, and livelihoods, affecting millions across an estimated total of 39 out of 75 districts .Only 14 districts that were classified as priority districts by the Government of Nepal were assessed. 1)Sindhupalchok 2) Rasuwa 3) Ramechhap 4) Kavrepalanchok 5) Dolakha 6) Dhading 7) Nuwakot 8) OKhaldhunga 9) Gorkha 10 ) Lalitpur 11) Kathmandu 12 )Bhaktapur 13) Makwanpur 14) Sindhuli, were directly affected and most of the affected areas are remote, hilly, village as well back warded. The earthquake destroyed/damaged the houses, buildings of hospitals, schools etc. We have been looking very closely to the affected people who have been trying to survive with difficulty. In this situation we could not remain silent so we have made a group to fight with this problem so from the day one of this event we have engaged to collect the foods, clothes, blankets, tent materials etc. and distributed to affected people. Along with distribution we have begun to make temporary houses. Considering the financial situation of affected people they cannot afford to rebuild house. 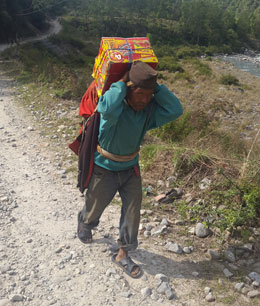